Entertainment Revue, founded in 1989, is a song and dance ensemble based in Tampa, Florida. The group has three separate performing casts based on age and level of performance. All cast members are females, ranging in age from 5-18. In addition to the cast members' training, there exists a special sisterhood amongst the girls. The majority of the cast members have participated in the group for a minimum of 6 years, making for lifelong memories and friendships.

We take great pride in setting our girls up for success on and off the stage. Entertainment Revue has performed for Presidents Bush and Clinton, Vice President Gore, community, corporate, and professional sporting events and in theaters across the state of Florida. The group has also appeared at the Florida Citrus Bowl, the Super Bowl Host Village, the World Team Tennis benefit with Elton John, and as an opening act for the American Idol Tour. They have been featured halftime performers for all of Tampa Bay’s professional sports teams, the Los Angeles Lakers and Orlando Magic. Additionally, they have performed at the NCAA Final Four, in the Broadway tours of “Joseph and the Amazing Technicolor Dreamcoat” and “The Wizard of Oz.”

Originally from Long Island, New York, Mike Palma  has been a performing Ventriloquist and Comedy Magician for over 25 years appearing In Comedy Clubs, Casinos and Theaters across the country.

Mike has also performed his special blend of entertainment for Corporate Companies such as Snap on Tools and the LPGA.

Through the years, Mike  has had the pleasure of entertaining a wide variety of audiences from every walk of life. His funny and fast paced shows come alive with his unique characters and side-splitting comedy magic !!

Mike Marino is affectionately known to millions of his fans worldwide as New Jersey's Bad Boy - is one of the most loved comedians of our time. He has performed in every major comedy club, theatre, casino and event center from New York to Los Angeles and around the world. Mike has also shared the stage with some of the biggest names in the business.

This content is restricted to residents of Polo Park East who are logged in. If you are a resident please login. 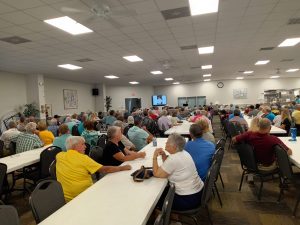 A party was held on Sunday March 27 2022 to celebrate the 26th anniversary of the formation of Polo Park East. Since the COVID pandemic required many of the park's activities to be cancelled the previous two years, this occasion  was a chance for us to:

A Remembrance Program was part of the event. Residents were asked to submit photos and narratives of loved ones they wanted remembered and their submissions were edited and assembled into a slideshow.
(A pdf of the slideshow can be viewed  Here)

A brief history of Polo Park East becoming Resident Owned followed the Remembrance Program and the Original Shareholders in attendance were recognized and thanked. (A pdf of this slideshow can be viewed  Here)

A short slide show was presented which highlighted some of the recent changes to the Park and some of the newer activities that weren’t happening back in 1996. 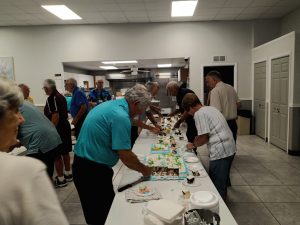 A time to welcome our newest residents followed that presentation and then the community celebrated with Cake and Ice Cream served by the Board of Directors.